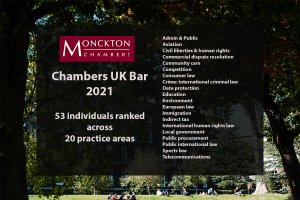 Monckton Chambers is one of the most highly ranked sets in the UK as it has been recommended in eleven practice areas; in five of these, Monckton is recognised as a “Band One” leading set:

The Set has also been ranked in a further six categories:

Individual members were also recognised as “Leading Individuals” in a further nine categories:

This is how the researchers summarised the set in the overview of leading sets:

Hailed as the “go-to set for difficult competition matters,” Monckton Chambers wins further plaudits for its strength in telecommunications law, with one commentator describing the set as “top of the pack.” It also boasts top-tier rankings in our public procurement, European law and indirect tax sections. Star individual Melanie Hall QC is lauded her for “extremely sharp and strategic insight” in relation to indirect tax, while Anneli Howard is described as a “stunningly bright barrister” on European law matters. The set is also home to top-ranked Jon Turner QC who “is an exceptional lawyer and advocate and arguably the best competition barrister in the UK,” according to one source, while another describes him as “brilliantly clever and analytical, with a calm, client-friendly approach.” The public procurement offering is bolstered by “guru” Michael Bowsher QC, “a fearless tactician” with “encyclopaedic knowledge of the area.” The “superb quality, innovative thinking and reliable service” of the set is further shown through its inclusion in the community care, administrative and public law, civil liberties and human rights, data protection, environment and sport rankings, with commentators also underlining the “genuine human warmth from the team” as a key attribute.

For further details on how Monckton Chambers performed, visit the Chambers and Partners website.