The Legal Cheek Awards 2023 shortlists have been announced and Monckton Chambers is delighted to announce that it has been shortlisted in the following categories:

Best chambers for quality of work 2023

The winners of this year’s awards will be announced on Thursday 16 March 2023.

For the full shortlist of Chambers please click here.

Chambers is pleased to announce that Anneli Howard KC and Alan Bates have been appointed as Deputy High Court Judges.

The appointments follow an open competition by the Judicial Appointments Commission. The role of Deputy High Court Judge is reserved for those who have the experience and expertise to deal with very complex cases which would otherwise be undertaken by High Court Judges.

Anneli and Alan will continue to practise full time from Chambers.

A full list of the Judicial appointments can be found here.

Every year, The Lawyer Hot 100 recognises a diverse mix of legal professionals who have been the standout lawyers in the UK over the previous twelve months. This year, Monckton Chambers’ Anneliese Blackwood is recognised amongst the 16 “Hot 100” barristers listed.

Anneliese Blackwood is described as follows:

Monckton junior Anneliese Blackwood didn’t come from a legal background. She grew up watching her family ply their trade in medicine. Blackwood considered following their lead, but came to the conclusion that she lacked the requisite coordination to work in a lab and so opted to study law. Her early work focused on public law and human rights. However, as a Monckton pupil, it was inevitable that she would be drawn to the world of competition.

Blackwood’s early experiences were nothing short of cinematic. One instance in the ‘Cardiff Bus’ case saw her holed up in a Cardiff hotel during an abuse of dominance trial while pop group JLS was in town. Sadly, the gathered crowds cheering for their heroes were not there to view Blackwood’s advocacy. More fool them.

Her recent work has seen Blackwood take crucial victories in the long-running Merricks trial over card payments and the ‘McLaren’ claim brought against one of Blackwood’s clients over allegations of cartel behaviour in the shipping of cars. Both of these cases will keep Blackwood exceptionally busy in 2023 and both have huge implications for the future of class action litigation. Her role will undoubtedly be a defining one.

The Lawyer’s Top 20 cases with proceedings set to be heard in 2023 have been listed today, three of which involve a total of 15 members of Monckton Chambers:

Euronet 360 Finance and others v Mastercard and Visa – listed in the Competition Appeal Tribunal on 2nd October for 12 weeks.

Epic Games and others v Alphabet, Google and others listed in the CAT in October for 6 weeks.

Subscribers to The Lawyer premium content can read the full article here.

Monckton Chambers is delighted to announce that Ben Lask has been appointed King’s Counsel in the 2022 Silks appointments. Ben will be sworn in during a ceremony in 2023. This is the first announcement of new King’s Counsel in over 70 years.

Ben specialises in Competition, Public and EU Law. He is Standing Counsel to the Competition and Markets Authority and currently a member of the Attorney General’s A Panel. He is recommended in Chambers UK in the fields of Competition Law, EU Law and Telecommunications, and in Legal 500 for Administrative & Public and Data Protection.

The members and staff of Chambers warmly congratulate Ben on his appointment to King’s Counsel.

The full list of appointments, announced today the 23rd December 2022, can be viewed here.

At a Bench Dinner on 29th November 2022, Michael M. Collins SC was called as an Ordinary Bencher of Middle Temple, having been unanimously elected by a decision of the Benchers of Middle Temple at Parliament. The occasion was presided over by Master Treasurer, the Hon. Ms. Justice McGowan DBE.  Amongst the guests who attended were Mr. Justice Charleton of the Supreme Court of Ireland, Ms. Justice Costello of the Court of Appeal of Ireland and Mr. Justice Barniville, President of the High Court of Ireland. Michael Bowsher KC and George Peretz KC were also present.

The European Circuit is an association of litigators, barristers, and advocates across Europe.  It provides a vehicle for litigators, barristers, and advocates to share experience and education. It is also has a strong social component with events across the Continent. We are delighted to announce Michael has been elected as Leader of the Circuit.

Michael said “ I am excited about this opportunity which means that from now I will take on a role equivalent to those of the Leaders of the other historic Circuits around England, Wales and Ireland.  These have provided practical support, education and a social focus for those barristers whose practice is based in particular regions of the country.  Indeed when I came to the Bar it was regarded as obligatory to join at least one Circuit.

The European Circuit was set up at the beginning of this century to support those whose practice involved work around Europe, not only those working in areas which obvious European roots such as competition, VAT or human rights, but also those who were active in aspects of the law which involved a cross border element.  A traffic accident abroad, the break up of a family living abroad, the estate of a UK citizen living elsewhere (or the other way around) might be typical examples of work where there could be a need for particular practical support, education, local contacts and so forth.  The Circuit has sought to provide that.  Evidently, things have not all gone as those who set up the Circuit might have planned, but those same cross border demands are there and if anything the challenges for those trying to help clients in those sorts of cases are ever greater.  So the Circuit will continue to address the needs of those who need to deliver services in other countries in Europe, or involving disputes in Europe.  In so doing it will enable the profession to provide a better service to its clients.

I don’t imagine that this will be easy and while the Circuit has its historic roots in the Bar we welcome all lawyers involved in cross border disputes from anywhere in Europe as Members.

We will be having a number of events during the year and a conference usually takes place in September.  We are not quite ready to reveal our destination for this year!

For further information on the European Circuit of the Bar please click here.

We are delighted to announce that Monckton Chambers has been named ‘Set of the Year’ at the 2022 Chambers and Partners UK Bar Awards!

Chambers and Partners said: ‘Our winning set is known for its erudite barristers who excel in complicated areas of market regulation. In what has been a bumper year, the barristers have led the development of the emergent class action regime within competition law in claims such as Le Patourel v BT, and the rail boundary fares claims. They have also continued to act in leading cases before the EU courts including British Airways v Commission. Outside the Competition law field, the barristers have represented government departments in key challenges concerning the procurement of PPE contracts during the Covid pandemic, and in the Supreme Court case of Fratila.’

George Peretz KC and Jack Williams were invited to give oral evidence to Parliament on the Retained EU Law (Revocation and Reform Bill) on 8 November 2022. Their evidence given to a Public Bill Committee scrutinizing the Bill can be viewed here (George from 10.54) and here (Jack from 14:03).

The transcript of their evidence can be found here and here. 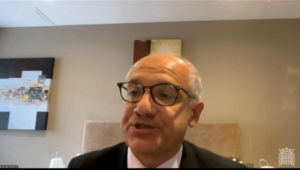 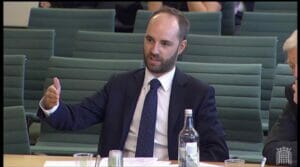 Please join Monckton Chambers, NERA Economic Consulting and Augusta for a conference celebrating recent developments in competition litigation in the UK and ringing in 2023. This is the fourth annual conference and happily again together in person at the ME Hotel.

Lord Justice Green of the Court of Appeal of England and Wales will start the conference’s discussion, followed by six panels then discussing different aspects of the regime, recent cases, and the year ahead. We will cover key recent decisions, innovations in the strategy and process of bringing litigation, the role of experts, and the new Subsidy Control rules.

As before, we bring together leading lawyers, King’s Counsel, academics, and economists to discuss competition litigation in the UK.

We then warmly welcome delegates to celebrate the season of cheer with an evening champagne reception while enjoying panoramic views of London from the Radio Rooftop Bar.

For more information, to see the programme for the day and to register your place, please click here.