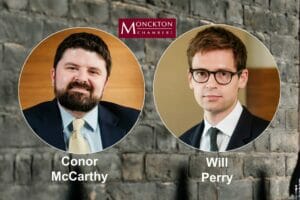 We are pleased to announce that Conor McCarthy has been promoted to the Attorney General’s “B” panel and Will Perry has been newly appointed to the “C” panel of Junior Counsel to the Crown.

Conor’s practice encompasses public law, civil claims, and international law. He is regularly instructed in complex disputes, both public and commercial, across chambers’ core areas of work. He has particular expertise in the areas of competition law, data protection and in claims involving issues of public or private international law or civil liberties.

The Attorney General maintains four advisory panels of junior counsel to undertake civil and EU work for all government departments. There are three London panels (an A panel for senior juniors, a B panel for middle juniors, a C panel for junior juniors) and a regional panel. In addition, there are three Public International Law Panels.

Both appointments will commence from 1 September 2022 for five years.

The full list of Monckton Chambers panel members is: