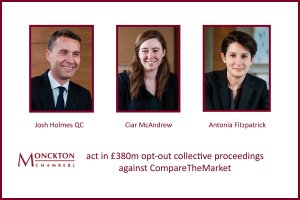 An opt-out collective claim on behalf of over 20 million UK consumers has today been filed against the companies which own and operate the price comparison website CompareTheMarket.com.

The claim is based on a decision of the Competition and Markets Authority, which last year found that CompareTheMarket infringed competition law by using “wide most favoured nation clauses” in its contracts with a number of insurers.