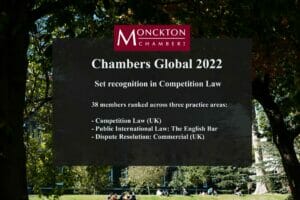 Chambers Global 2022 has just been published, ranking the top lawyers and law firms in over 200 jurisdictions across the world.

Monckton Chambers is once again one of five sets to be recognised for Competition Law in UK. In addition, individual barristers, 38 in all, are ranked across three practice areas: Competition Law (UK), Public International Law: The English Bar and Dispute Resolution: Commercial (UK).

Nikolaus Grubeck, Daisy Mackersie, David Gregory, Jack Williams and Alexandra LIttlewood are ranked in the Global Guide for the first time this year.