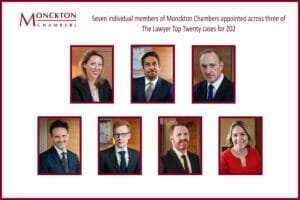 Four QCs and three Juniors at Monckton Chambers were instructed across three of the twenty cases highlighted by The Lawyer for 2022:

“A supercomputer is at the heart of this procurement challenge. Launched against The Met Office, the UK Government-backed weather agency, it has been claimed by Atos IT Services that the procurement process was not run properly, particularly when it came to evaluating proposed bidders.”
For the claimant, Atos IT Services: Valentina Sloane QC and Azeem Suterwalla, instructed by Burges Salmon partner Chris Jackson
For the defendant, The Met Office: Ewan West, instructed by Hogan Lovells partner Rupert Sydenham

“The estate for former retailer Phones4U is challenging several major mobile network operators over an alleged anti-competitive breach of contract. The dispute dates back to 2014, when O2, Vodafone and EE allegedly withdrew supplies from Phones4u and subsequently entered an exclusive deal with rival Carphone Warehouse, both of which were then the two major intermediaries selling mobile phone contracts in the UK.”
For the defendant, EE: Meredith Pickford QC and David Gregory, instructed by Clifford Chance partners Samantha Ward and Jeremy Kosky
For the defendant, Vodafone and Vodafone Group: Rob Williams QC, instructed by Hogan Lovells partners John Tillman, Angus Coulter and Alex Sciannaca, and counsel Victoria Lindsay and Alice Wallace-Wright

“As green technology gains traction, disputes arising out of projects in this area are going to become more and more of a theme. This case concerns alleged cartel behaviour from cable developer and manufacturer Prysmian as well as a host of different suppliers.”
For the defendants, Prysmian Cavi e Sistemi Srl and ors: Anneli Howard QC, instructed by Macfarlanes partner Cameron Firth

Subscribers to The Lawyer can read the full article here.