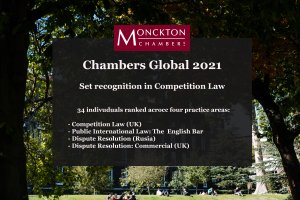 Chambers Global 2021, ranking the top lawyers and law firms in over 200 jurisdictions across the world, has been published.

Competition Law in UK. Individual Monckton members ranked for this category are:

Thomas Sebastian, described as “very clever, thorough and a go-to for WTO matters“, is once again in the Guide under Public International Law: The English Bar.

Drew Holiner, described as “excellent at the mechanics of arbitration,” is one of only five UK lawyers ranked for Dispute Resolution (Expertise Based Abroad) in Russia.

Drew Holiner is also ranked, for the category of Dispute Resolution: Commercial (UK) in the Global Guide , alongside once again, William Buck, described as having “a strong commercial head on his shoulders”, and Gregory Pipe, noted for being “ highly experienced and his strategising is superb”. William Hooper, “a master of detail in a case“, is in the tables for the first time as “up and coming”.