Daniel Beard QC is The Lawyer’s Barrister of the Week 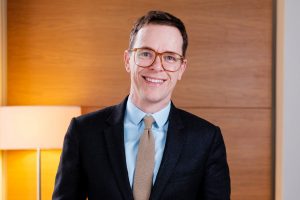 The Lawyer has selected Daniel Beard QC, who acted for Apple in the €13bn State aid and tax case (see website news 15 July), as its “Barrister of the Week”

The recognition was the result of Daniel being a key member of the team, that convinced EU judges to reverse a European Commission decision, which had ordered Apple to pay back €13bn in taxes to the Republic of Ireland.

Acknowledged by The Lawyer as being “one of the biggest decisions to come out of the appeals court in the EU”, Daniel has worked on the case for the past five years, instructed by Freshfields. Fellow Monckton members Alan Bates, Ligia Osepciu and James Bourke, were also on the team working closely with the in-house lawyers at Apple.

“Barrister of the Week” is selected by The Lawyer’s Litigation Tracker team which also concludes that Daniel Beard is the busiest barrister at Monckton, acting on 31 cases in the public domain since 2015.