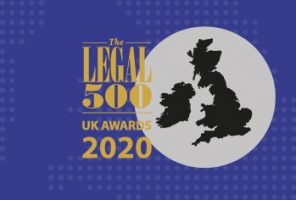 Based on months of research, which includes 70,000 interviews with in-house counsel, law firms and sets, the shortlist for the 2020 awards has just been announced.

The winners of will be announced on the Legal 500 website in the first week of December and invited to attend a ceremony on the 27th February 2020.