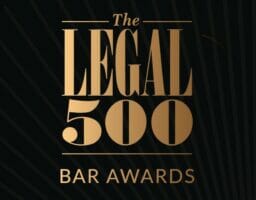 The Legal 500 Bar Awards UK seeks to recognise chambers as a whole and individuals (barristers of all levels of seniority), clerks, other chambers professionals and arbitrators from London and across England, Scotland and Wales.

The shortlist for the 2022 awards has just been announced.

Monckton Chambers and its members have been nominated for awards in six of the practice areas: Competition, International Law, Public Law, Sport, Tax and Technology and Data. The Set is nominated for four practice areas and nine members are shortlisted for individual awards:

Competition set of the year

International law set of the year

Sport set of the year

Technology and data set of the year

Technology and data junior of the year: Ben Lask

The winners will be announced at the awards ceremony on the 5th October 2022.

The full shortlist can be found on the Legal 500 website.