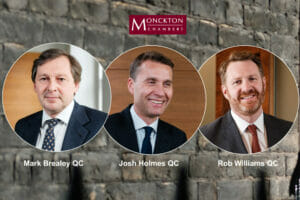 Pfizer and Flynn were found by the CMA to have excessively priced a pharmaceutical drug contrary to section 18 Competition Act 1998. The CAT allowed the companies’ appeal in part, confirming the CMA’s finding of dominance but allowing the appeal on abuse. The CAT remitted the issue of excessive pricing to the CMA for reconsideration (this direction being upheld by the Court of Appeal on appeal by the CMA).

The CAT also awarded the successful companies’ approximately two thirds of their costs on an issues basis. The CAT considered that “costs follow the event” was an appropriate starting point but that some discount should be given for the CMA having succeeded on the issue of dominance.

The Court of Appeal set aside the CAT’s costs ruling. This was because the Court of Appeal considered that the CAT had disregarded a general legal principle based on a line of cases beginning with Bradford MDC v Booth [2000] 164 JP 485 and ending with BT v Ofcom [2018] EWCA Civ 2542 that, where there is no default position expressed in the wording of the power to award costs, the starting point should be that no costs order should be made against a public body such as the CMA provided that it had acted reasonably.

The Supreme Court allowed the companies’ appeal and reinstated the CAT’s costs Order. Lady Rose gave the unanimous judgment The reasons were as follows.

First, there is no generally applicable principle that all public bodies should enjoy a protected costs position when they are unsuccessful. The Booth line of cases supports a principle that examines whether there is a “chilling effect” on the authority acting in the public interest if an adverse costs order were made [97]. This chilling effect cannot be presumed but depends on the nature of the public body, the nature of the decision and the frequency with which such decisions are made [98]. In the present case the way the CMA is funded dispelled any notion of a chilling effect. This is because the CMA can set-off any adverse costs orders against the income it receives from penalties imposed on companies for breaching the competition rules [123]. Further, there were good policy reasons for applying a cost follows the event principle as it was apt to discipline public authorities, here the CMA, from adopting unfounded decisions [131].

Second, the CAT’s existing case law on costs was consistent with the Booth line of cases [136]. The principle of costs following event which was supported by Rule 104 of the Tribunal Rules did not mean that costs follow the event was the end point. The CAT had adopted a sophisticated, flexible and multifaceted approach to costs awards which struck a balance between fairness to the parties and ensuring the effectiveness of the competition regime [152].