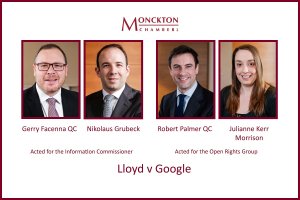 Allowing Google’s appeal, the Supreme Court held that damages cannot be awarded under the Data Protection Act 1998 for “loss of control” of data without proof that it caused financial damage or distress. On that basis, it concluded that the claim was not suitable to proceed as a representative action, because compensation for the alleged breaches of data protection law would need to be individually assessed. Delivering the single agreed judgment of the Court, Lord Leggatt stated: “In order to recover compensation under the DPA 1998 for any given individual, it would be necessary to show both that Google made some unlawful use of personal data relating to that individual and that the individual suffered some damage as a result” (§8).

The judgment is available here. A detailed case note by Laura Elizabeth John is here.