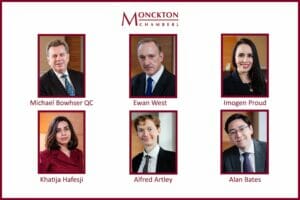 The High Court has today handed down its long-awaited judgment in four high-profile judicial review challenges to the Government’s award of contracts for PPE (personal protective equipment) during the early months of the pandemic.

All nine of the contracts (together worth more than £700 million) had been awarded without competition using the Government’s emergency powers under Regulation 32(2)(c) of the Public Contracts Regulations 2015; none of the contracted suppliers (Pestfix, Clandeboye and Ayanda) had a history of supplying medical grade PPE, and in a number of instances the items had proven unusable, having failed testing on delivery.

The Good Law Project, supported by a doctors’ organisation, challenged the lawfulness of these contract awards, and permission was granted on three grounds (permission to challenge the use of Regulation 32(2)(c) itself having been refused at an earlier stage):

i. First, that the Secretary of State had breached the EU principles of equal treatment and transparency by failing to ensure competition between suppliers and in particular through the use of a ‘high priority’ or ‘VIP lane’ for suppliers who had been referred by Ministers, MPs and senior officials.

ii. Second, that the Secretary of State failed to provide proper reasons for his decisions.

iii. Third, that the decisions to award the contracts to PestFix and Ayanda were irrational in that insufficient financial or technical verification was carried out, and owing to operation of the High Priority Lane

The Secretary of State opposed all grounds; he also argued that the Claimants lacked standing to pursue their challenges and relief fell to be refused.

Following a five-day hearing in May 2021, O’Farrell J found almost entirely in the Defendant’s favour. In brief summary, she held:

i. The Secretary of State was obliged to comply with the principles of equal treatment, notwithstanding the applicability of Regulation 32(2)(c). While the ‘open source’ approach he had adopted generally was compliant, the operation of the High Priority Lane itself was not: offers that were introduced through ‘Senior Referrers’ received earlier consideration at the outset of the process, thereby increasing their chances of securing a contract.

ii. Prior to the issue of proceedings, the Secretary of State had complied with his duty to give clear and sufficient reasons for awarding the contracts under challenge.

iii. None of the award decisions was irrational: the Secretary of State had not placed any reliance on their referral to the High Priority Lane when awarding the contracts to PestFix and Ayanda, and sufficient technical and financial verification had been carried out.

iv. The Claimants had sufficient interest to bring the claims.

v. Relief (in this case, a declaration of unlawfulness) in respect of the breach of the obligation of equal treatment was nevertheless refused under s.31(2A) of the Senior Courts Act 1981, on the basis it is highly likely that the outcome would not be substantially different. Given the high volumes of supply on offer, the contracts would still have been awarded.

Aside from the political and media interest in the Government’s Covid-related procurement activities more generally, the decision is likely to be of considerable importance for public lawyers and procurement practitioners in future:

i. As well as clarifying the requirements of equal treatment and transparency which apply under Regulation 32(2)(c), O’Farrell J’s lengthy discussion and authoritative restatement of these principles more generally is likely to be of wider significance for any challenge based on breach of these retained EU procurement principles.

ii. The judgment emphasises the high bar for any rationality challenge: the Claimants’ rationality ground failed in its entirety, with the judge noting that in the circumstances “the court’s role is not to second-guess an appropriate calculation of the risks involved or substitute its own assessment as to the propriety of the contracts awarded“. Even where there was evidence that errors had been made in technical assurance process, it was “not appropriate for the court to scrutinise every aspect of it in minute detail or substitute its own decision.” Those acting for Defendants may well refer these dicta as well as to the summary of the law on rationality in future challenges.

iii. The case is also an important reminder of the power of s.31(2A) SCA 1981, in particular for ‘public interest’ claimants who are seeking only declaratory relief.

iv. Finally, the ancillary ruling on confidentiality (following an application by the Claimants which was supported by submissions from the Press Association) is likely to be of ongoing significance whenever the Court is required to balance the interests of open justice with the confidentiality of commercially sensitive information in procurement proceedings.

The full judgment can be read here.