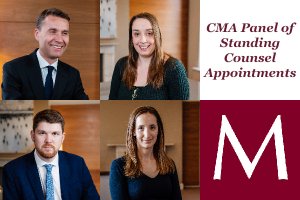 Congratulations to Josh Holmes QC, Julianne Kerr Morrison, Michael Armitage and Daisy Mackersie on their appointment to the CMA’s panel of counsel following an open competition. They join Rob Williams QC and Ben Lask, current Standing Counsel members from Monckton Chambers, bringing the number of Monckton appointees to six out of a total panel of eleven. All six Monckton members have appeared in some of the main challenges to regulatory competition decisions.

The CMA, the UK’s primary competition and consumer authority, is an independent non-ministerial government department with responsibility for carrying out investigations into mergers, markets and the regulated industries and enforcing competition and consumer law. The panel of counsel is intended to provide the CMA with a strong team of advocates and external legal advisers, who are enthusiastic about and committed to its work – but also able to give it detached and objective advice. The CMA has expanded its Standing Counsel to make sure it has the right number of members to assist in its work going forward. This reflects the growth in litigation undertaken by the CMA across all areas of activity as well as in anticipation of an increase in workload, following the UK’s departure from the EU and the establishment of the Office for the Internal Market and the Digital Markets Unit.

These appointments were made following an open competition with the consent of the Attorney General. They are for a term of 3 years with a possible extension of a further 3 years.
For further information, see CMA news release here.