All the World’s a stage: the UK’s global future : UK White Paper on Brexit and later texts

Post Brexit aims of the UK Government : White Paper on exit from the EU and later texts . 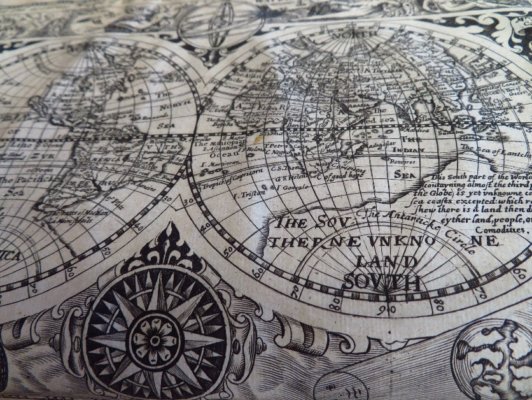 (Florentine map of the world from an early 17th century atlas in the Fellows’ Library – with thanks to the Principal and Fellows of Jesus College, Oxford)

Note: a White Paper is a description of a document containing a synthesis of facts and argument leading to a statement of UK Government policy,

1. The UK seeks a global future

The aim of this presentation is to describe the key strategic issues that will arise in  the UK/EU Brexit negotiations; to identify, assuming  agreement is reached, how many agreements are contemplated; and  to offer a view on what (in practice) the negotiations will involve .

The UK intends not only to form a new partnership with Europe but also with the rest of the world. The Government foresees a “truly global” Britain.

” All the world’s a stage

And all the men and women merely players;

They have their exits and their entrances ;

And one man in his time plays many parts,

His acts being seven ages.”

The UK Prime Minister has made two speeches (2 October 2016 and 17 January 2017) in which she has set out her wish list for the upcoming Brexit negotiations. On 2 February, a White Paper was published by the UK Government (The United Kingdom’s exit from and new partnership with the European Union). On 29 March, the UK Prime Minister notified the EU of its intention to leave under Article 50/TEU, together with a further elaboration of the UK Government’s aims and its preferred approach to the negotiations. On 30 March, the European Council published its “Draft guidelines following the United Kingdom’s notification under Article 50 TEU“.

3. A summary of the agreements for negotiation.

4. Phasing of negotiations – the competing arguments.

How shall we start? How long have we got? In her letter of 29 March, the UK Prime Minister argued that the right way is to negotiate a withdrawal treaty and future trade agreement(s) simultaneously with one another.

By contrast, in the draft EU Guidelines, the EU follows the approach that is contemplated in Article 50. As to simultaneous negotiations, the Council will monitor progress on the terms of the withdrawal agreement. When “sufficient progress has been made”, it will determine whether to allow negotiations to proceed to the next phase.

The Withdrawal Agreement under Article 50 would seek the disentanglement of the UK from the EU and “from all the rights and obligations the United Kingdom derives from commitments… as Member State”. The exit invoice is already a major issue. So is the position of EU citizens in the UK and UK citizens in other Member States. It will have to provide for handling the future of UK membership of EU agencies and for the future of UK officials in the EU institutions. It will have to deal with transitional matters such as legal certainty and equal treatment in respect of cases before the CJEU; and for administrative procedures pending before the Commission or the agencies.

Separately the UK will also have to handle the implications of exit for obligations that it has adopted under international treaties negotiated on its behalf by the EU, such as air services agreements with third countries like the USA.

The White Paper says that the UK will not seek membership of the Single Market. In paragraph 8.1, it states: “It is in the interests of the EU and all parts of the UK for the deeply integrated trade and economic relationship between the UK and the EU to be maintained after our exit from the EU. Our new relationship should aim for the freest possible trade in goods and services between the UK and the EU”. That agreement may take in elements of the current Single Market arrangements in certain areas. In her letter of 29 March, the UK Prime Minister asserts that it should “cover… sectors crucial to our linked economies such as financial services and network industries”. The network industries include transport, energy and telecommunications

The EU guidelines recall that Article 50 requires the parties to take account of the framework for future relationship with the EU in arrangements for withdrawal . Specifically the EU has stated that “[p]reserving the integrity of the Single Market excludes participation based on a sector-by-sector approach. A non-member of the Union that does not live up to the same obligations as a member, cannot have the same rights and enjoy the same benefits as a member”.

The UK wishes to take advantage of the opportunity to negotiate its own preferential trade agreements around the world. So it will not be bound by the Common External Tariff or participate in the Common Commercial policy (paragraph 8.43). It further observes (paragraph 8.2) that “The UK already has zero tariffs on goods and a common regulatory framework with the EU Single Market. ” The implication seems to be that that is what the UK will seek.

8. Security cooperation: has a threat been made by the UK?

The UK has, on one view of its Article 50 letter, linked future security and intelligence cooperation with securing an acceptable trade deal. No responsible government should bargain on the basis of threatening to undermine a friendly State’s national security.

9. The unpredictable timeline for the period of negotiation, including national constitutional requirements (if any)

Point (a) Timing: the impact of uncertainty

The possible length of the negotiations is totally unclear. If the European Parliament is to be given a reasonable opportunity to consider the texts, it will need at least six months. But some sectoral industries are already alarmed at the prospect of the negotiations going down to the wire. Few observers would doubt that unquantifiable delay is going to result in instability, both for businesses and for individuals.

The withdrawal agreement will be governed by Article 50 and will be concluded by the Council and not by the individual Member States. It is unlikely to require ratification by each Member State.

The challenge of the timeline of two years has brought some realism into each side’s thinking. Both sides recognise (but the EU holds the whip hand) that there may have to be a transitional agreement to provide legal certainty while a permanent trade deal is finalised.

Crucially, the guidelines make clear that , if a transitional trade agreement is entered into, by the EU, existing EU regulatory, budgetary , supervisory and enforcement instruments will continue to apply – namely the Commission and CJEU will continue to have jurisdiction.

What will happen to the international treaties negotiated by the Commission , binding on each Member State?

The negotiations on the Article 50 Agreement, the EU/UK Trade Agreement and the Customs Agreement will be separated , save where there are overlaps. In each area, the negotiators will split it into sectoral technical working groups, such as a working group on financial services and a working group on each of the main network industries, as well as on cross-cutting issues.

In line with established practice, “nothing is agreed until everything is agreed”. In the endgame, there will be a cauldron full of the biggest issues. Then the trade offs will begin. The assumption is that these negotiations are too big to fail. But what if the unthinkable happens?