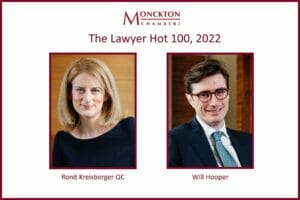 Every year, The Lawyer Hot 100 recognises a diverse mix of legal professionals who have been the standout lawyers in the UK over the previous twelve months. This year, Monckton Chambers has two members amongst the 19 “Hot 100” barristers listed – Ronit Kreisberger QC and William Hooper.

Highly in demand, with a jam-packed diary right up to the end of 2022, Ronit Kreisberger QC is spearheading heavyweight competition litigation at Monckton Chambers.

She is at the heart of the collective actions trend, acting on several high-profile cases at the CAT. Hot on the heels of Merrick v Mastercard, she acted in Justin Le Patoure v BT. The £600m claim against BT alleged excessive pricing in abuse of its dominant position in stand-alone landline telephone services. In 2021, she represented the claimants in a £1.5bn collective action case against Apple. The tech giant has allegedly been overcharging customers of its App Store.

This is Kreisberger’s second time in the Hot 100, having made the list in 2007 when she was just two years’ call. Then, she acted in the first case in which a UK court awarded damages for harm suffered because of a competition law infringement.

There is no sign of her slowing down any time soon, as she kicks off this year with a case very similar to the Apple one, this time against Google.

Monckton Chambers’ reputation as a world-class centre for competition knowledge is undisputed, but the set is perhaps less recognised for the quality of its commercial tenants. Changing that perception, says junior barrister Will Hooper, is exactly why he joined the set and his work is gaining Monckton the commercial recognition he thinks it deserves.

The biggest win in Hooper’s year came in a case over what was once the most expensive car ever sold. The dispute over the $44m contract was covered in the national media and catapulted Hooper’s profile to a much higher level; helpful when one of your key goals is profile-building for the set.

As 2022 starts, Hooper is already contemplating what will define his next year. It already looks like the next 12 months will include the telecoms and advertising sectors. The latter is particularly fresh ground, with a case to be heard considering the much-spoken-of-but-little-understood area of NFTs. If Hooper scores a win, he could well define the future of NFT cases and that would do his and Monckton’s reputations no harm whatsoever.

Subscribers to The Lawyer can read the full article and details of the hundred here.