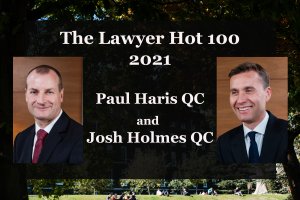 Every year, The Lawyer Hot 100 recognises a diverse mix of legal professionals who have been the standout lawyers in the UK over the previous twelve months. This year, Monckton Chambers has two members amongst the 18 “Hot 100” barristers listed – Paul Harris QC and Josh Holmes QC.

Paul Harris is described as follows:

Whether you’re someone who uses Mastercard or a fan of Manchester City, Paul Harris QC was your man to thank in 2020. From a legal perspective, it’s hard to look beyond the Monckton silk’s success in the Merricks affair, during which he set a game-changing precedent by leading his team to a Supreme Court victory in December. The case, which has now been given the green light to proceed, seeks to reclaim funds for people aged 16 or over who used Mastercard and were overcharged on transaction fees between 1992 and 2008, which could apply to 46.2 million adults in the UK.

However, as the Manchester City-loving barrister admits himself, you can’t get better than bagging a last-gasp win for your hometown club, even if it comes in the form of a judgment rather than a goal. It was back in July that the state-school lad from Manchester flew to Switzerland to represent the club in the Court of Arbitration for Sport, where it faced the prospect of a two-year ban from the Champions League.

In a comeback of epic proportions, Harris successfully appealed a previous decision and reduced the club’s fine by £20m in the process.
It is often City’s star players who receive the glory for dramatic wins; however, this time it was all Harris.

When it comes to the UK Bar, Josh Holmes QC is the King of Competition. Since taking silk in 2017, the Monckton man’s career has gone from strength to strength, building on his reputation as Ofcom’s go-to advocate to gain instructions on most of the biggest competition cases around.

Whether it be leading a star-studded team on the FX rigging litigation or preparing for the long-awaited Servier trial in July, Holmes admits his caseload does require finding extra hours in the day, which occasionally involves not sleeping. This commitment to the client cause and a need to live and breathe his cases has led to Holmes securing many lucrative wins in complex litigation.

An enjoyment of cut-and-thrust courtroom drama has also assisted Holmes in high-stakes matters, something which has only enhanced his reputation as competition’s smiling assassin.

The only way now is up for the EU expert, particularly as he ploughs on in a practice area that remains unfazed by the pandemic. There is no doubt he picked the right horse when becoming a barrister and he has since ridden it superbly.

Subscribers to The Lawyer can read the full article and details of the hundred here.