The battle over the legality of Interchange Fees continues: Kassie Smith QC and Fiona Banks in CAT summary judgment decision against Visa and Mastercard 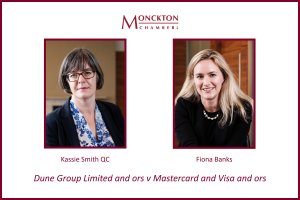 The Competition Appeal Tribunal handed down judgment on 26 November 2021 in Dune Group Limited and ors v Mastercard and Visa and ors [2021] CAT 35. The judgment represents the latest in a long line of cases considering whether the card schemes rules, obliging the payment of an interchange fee by acquirers to issuers in respect of each transaction settled over their payment platforms constitutes a breach of the Chapter I prohibition and/or Article 101 TFEU. The Claimants brought an application for summary judgment in respect of their claims relating to the payment of UK and other European domestic MIFs, commercial card MIFs and Inter-regional MIFs, including for the period after the coming into force of the Interchange Fee Regulation (the “IFR”), arguing that the essential factual basis of the present claims is materially indistinct from the basis of the previous Court of Appeal ([2018] EWCA Civ 1536) and Supreme Court ([2020] UKSC 24) judgments considering MIFs.

The Tribunal held that both card schemes had breached the Chapter I prohibition and/or Article 101 TFEU for the period up to the coming into force of the IFR in respect of consumer intra-EEA MIFs and UK, Irish, Gibraltar and Malta domestic consumer MIFs. For the period after the coming into force of the IFR, the Tribunal considered that the question of whether there is a restriction of competition would need to be resolved at trial.

In respect of Inter-regional, Commercial Cards and Italian domestic MIFs, the Tribunal considered that neither the European or domestic appellate judgements were binding on the question of whether Article 101(1) had been breached and again this was a matter which needed to be heard at trial.

However, the Tribunal found against Visa, in finding that although set by Visa Inc after 19 June 2016, the Visa scheme MIFs constituted an agreement between undertakings or a concerted practice for the purpose of Article 101(1) and the acquisition of Visa Europe by Visa Inc does not give rise to an arguable defence to the claims. Moreover, although Visa Europe is not responsible for setting the Inter-regional MIF, there remained an agreement or concerted practice for the purpose of Article 101(1) in respect of those MIFs – the European acquirers having agreed with Visa Europe that they will pay oversees issuers the inter-regional MIF set by Visa Inc.

Kassie Smith QC and Fiona Banks appeared on behalf of the Claimants.  Click here for the CAT’s judgment.