Symposium on the Legal implications of the referendum on EU membership 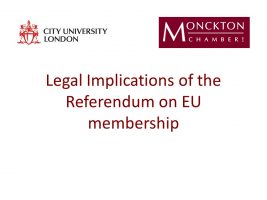 The outcome of the promised in/out referendum on UK membership of the EU will be a landmark in the history of the United Kingdom.

Monckton Chambers and City University, London, have an established reputation as pivotal players in leading thinking on the legal implications of possible UK exit from the EU. At a symposium held on 2 December (the full agenda is available here), they built strongly on that reputation. Speakers covered in depth a range of highly topical questions, policy and legal.

The two headline speakers were:
•Jonathan Faull, who heads the EU task force which has strategic oversight of the negotiations with the UK on its aim of reforming its relationship with the EU; and
•Lord Hannay, an independent peer, formerly the UK’s permanent representative to the European Community and to the United Nations.

Lord Hannay set the scene for the run up to an EU referendum, reminding attendees that “[the] legal consequences [of the referendum] do matter enormously; they need to be explained in language comprehensible to the non-practitioner; and they do need to be understood by the electorate before they vote, because our prosperity and our security depend on the rule of law”.

Mr Faull covered the state of the negotiations, basing his comments on David Cameron’s letter to Donald Tusk. The probability is that the UK renegotiation will reach the Council in early 2016.

In response to Lord Hannay’s invitation, an array of leading lawyers spoke, namely:

Points, legal and policy, arising in the debate included:

In his closing remarks, Jonathan Faull outlined the likely developments between now and the Council meeting at which a full substantive discussion will take place, possibly February 2016. Any future agreement might be reflected in a range of instruments, such as declarations, agreements binding in International Law and (as necessary) EU legislation.

The symposium on 2 December follows the seminar that Monckton held on 24 June (read here)  and other relevant presentations made by members of chambers, including in other EU Member States (read here).