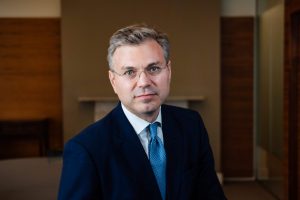 Professor Panos Koutrakos has been mentioned in two Opinions by Advocates General of the European Court of Justice. Both cases are about judicial review in the European Union’s Common Foreign and Security Policy (CFSP), an area of profound significance. The Court of Justice only has limited jurisdiction in CFSP and there has been developing case-law on the scope of this jurisdiction.

In Case C 730/18 P SC v EULEx Kosovo, the EU Rule of Law Mission in Kosovo was sued for damages by an employee whose contract had not been renewed. After the EU’s General Court had dismissed her action, she appealed to the Court of Justice. In his Opinion, Advocate General Tanchev dealt, amongst others, with the scope of the Court’s jurisdiction in CFSP and referred to two pieces of work by Professor Koutrakos: his book entitled Research Handbook on the EU’s Common Foreign and Security Policy (co-edited with S Blockmans) (Edward Elgar, 2018), and his article on ‘Judicial Review in the EU’s Common Foreign and Security Policy’, (2018) 67 International and Comparative Law Quarterly 1.

In Case C 14/19 P European Union Satellite Centre (SatCen) v KF , a decision by the Appeals Board of the European Union Satellite Centre removing an employee from her post was challenged before the EU’s General Court. After the latter had found for the applicant, the EU Satellite Centre appealed before the European Court of Justice. In his Opinion, Advocate General Bobek concluded that the Court of Justice had jurisdiction to rule on the matter and he referred to the above article by Professor Koutrakos on ‘Judicial Review in the EU’s Common Foreign and Security Policy’, (2018) 67 International and Comparative Law Quarterly 1.