Monckton barristers speaking about ‘Brexit: The Future of International Trade’ 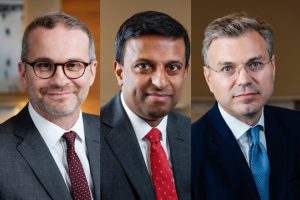 Monckton barristers Thomas Sebastian and Professor Panos Koutrakos spoke at an event organised by UKLegalFuture at the House of Commons on 8 February 2017.

The topic of the event was ‘Brexit: The Future of International Trade’. It was chaired by Tim Ward QC and introduced by the Chairman of UKLegalFuture, John Davies (Freshfields). The audience consisted mainly of Members of both Houses, including the President of UKLegalFuture, Dominic Grieve QC MP.

Jonathan Faull (until recently Director General, European Commission, the most senior British EU civil servant and Head of the Task Force for negotiations with the UK) gave a keynote speech on ‘Leaving the EU but remaining part of Europe?’. He highlighted the legal and practical challenges of the negotiations between the UK and the EU and discussed the different stages that are prescribed in Article 50 TEU.

Professor Panos Koutrakos discussed the post-Brexit status of international trade agreements that currently apply to the UK. He outlined the legal and practical issues that arise from negotiating new trade agreements and examined the UK’s position in multilateral agreements (including the Unified Patent Court Agreement). His handout is available here.

Thomas Sebastian dealt with the so-called “WTO Option”. He addressed two questions of process: (1) Whether the UK will be able to rely on WTO rules post-Brexit even if other WTO Members object to its proposals for revised “schedules”? (2) Whether any post-Brexit UK-EU transitional arrangements will have to be approved by the WTO? His presentation is available here.

Lourdes Catrain (Hogan Lovells International) focused on the negotiation of the UK-EU agreement. She referred to the White Paper (The United Kingdom’s exit from and new partnership with the European Union) and explored the different options for the UK’s future relationship with the EU, with emphasis on customs and regulatory standards.