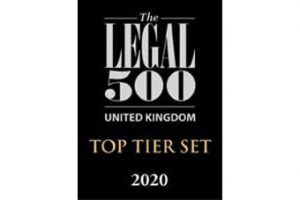 In the recently launched Legal 500 UK Bar 2020, 47 individual barristers from Monckton Chambers are listed across 19 practice areas with many recommended in multiple categories.

Monckton Chambers has been recommended, as a TOP-TIER set in the following five practice areas:

The Set has also been ranked in a further four areas:

Individual members were also recognised as “Leading Individuals” in:

The annual legal directory further described the Set as follows:

Although known as a ‘leading set’ for EU, competition, and public procurement law instructions, thanks to having ‘excellent strength in depth across the spectrum’, Monckton Chambers ‘also has barristers who can turn their hand to more esoteric public law challenges’. Chambers is also a ‘go-to’ for civil liberties and human rights work. ‘Barristers have always made themselves available on a pro bono basis, including at the highest level, and consistently produced work of the highest quality.’ Robert Palmer, Ronit Kreisberger, and Valentina Sloane took silk in 2019. Meanwhile, in other news, Steven Gee QC joined chambers after five years at boutique litigation firm Joseph Hage Aaronson LLP, while Ben Emmerson QC arrived from Matrix Chambers. Senior clerk David Hockney and his deputy, John Keegan, ‘run a great clerking team’ that is ‘a cut above all other sets’. The clerks are ‘responsive to requests for assistance; open to considering varied arrangements for instruction, and thoroughly 21st century in their use of technology and means of communications’. First junior Steven Duffett is ‘highly effective in a hands-on and task-focused way’.