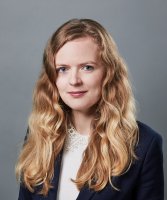 Kristina Lukacova, who has a broad commercial and chancery practice with a focus on commercial litigation and company and insolvency matters, has joined Monckton Chambers.

Kristina has a particular interest in private international law and is regularly instructed in cases involving complex issues of jurisdiction, including acting as sole counsel on a $4m contract claim before the DIFC-LCIA Tribunal, defeating a jurisdiction challenge and succeeding on a preliminary issue of contractual interpretation.

Kristina has worked with barristers from Monckton Chambers on recent instructions, including acting for the Secretary of State for Transport in relation to Eurotunnel’s challenge of Brexit-related contracts for additional ferry capacity. She was led in this case by Philip Moser QC, and assisted alongside Azeem Suterwalla and Ewan West.

“We are delighted that Kristina Lukacova has joined Monckton Chambers to bring her expertise to the growing team of members who are practising in the commercial and arbitration fields, both domestically and internationally. These may be challenging times and it is even more important that we continue to look to the future with confidence, optimistic about our ongoing strategic goals.”