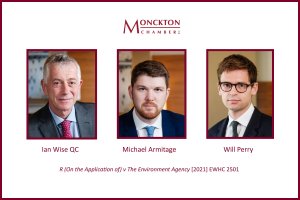 In a landmark human rights case involving a vulnerable five-year-old boy, Mathew Richards, Monckton’s Ian Wise QC, Michael Armitage and Will Perry succeeded in showing that the Environment Agency is not discharging its statutory duty under s. 6 of the Human Rights Act 1998 to protect the boy’s right to life and right to respect for private and family life (under Articles 2 and 8 respectively of the European Convention on Human Rights) in its regulation of harmful hydrogen sulphide emissions from the Walleys Quarry Landfill Site in the Staffordshire village of Silverdale.

The Silverdale community’s campaign to “Stop the Stink” from the Landfill has been well publicised in the national media and discussed in Parliament. Mathew, the Claimant, was born prematurely and suffers from bronchopulmonary dysplasia (“BPD”) as a result. In his judgment of 16 September, Fordham J found: (i) that ongoing exposure to hydrogen sulphide emissions from the Landfill at current levels was responsible for making Mathew’s BPD “an inevitable precursor” to Chronic Obstructive Pulmonary Disease, “a serious illness reducing life expectancy”; and (ii) that, as such, exposure to those emissions posed a “real and imminent risk” to Mathew’s life for the purposes of Article 2 ECHR. He noted that the Environment Agency has the power to protect Mathew from that exposure.

Fordham J did not accept the Environment Agency’s submission that it had done what the law required it to do to protect Mathew, because he had not been presented with any evidence of a disciplined plan to address a recommendation that Public Health England had made in August that “all measures” be taken to reduce off-site emissions of hydrogen sulphide “as early as possible” to certain levels.

Fordham J underlined that PHE’s recommendations required “real and significant change, as a matter of urgency”, in order to ensure that human rights safeguards were practical and effective. In line with those recommendations, he therefore made a declaration that the Environment Agency must take measures to ensure that off-site odours from the Landfill are reduced as early as possible to meet the World Health Organisation’s half-hour average guideline level of 5 parts per billion, and that concentrations of hydrogen sulphide in the local area must be reduced to below the US EPA Reference Value of 1 part per billion (recommended by PHE as a safe level for chronic inhalation) from January 2022, concluding those reductions would make a “very real difference” to the air that Mathew and his community breathe.

The case is legally significant for three principal reasons. First, live evidence was heard from expert witnesses, namely Mathew’s consultant paediatrician Dr Ian Sinha and Professor Sir Colin Berry, a histopathologist and toxicologist who was the expert for the Interested Party, the Landfill operator Walleys Quarry Limited. That is rare in judicial review in any event, but it is thought that this is the first time that the Administrative Court has used the “hot-tubbing” of experts as a way of cutting through the issues. Second, Fordham J’s is the first domestic judgment explicitly to decide that a reduction in life expectancy can be identified with a “real and imminent risk” to life for the purposes of Article 2 ECHR. Third, this was the first domestic environmental case that considered both Article 2 and Article 8 ECHR in tandem.