Frank Mitchell to be admitted to the Inner Bar in Ireland 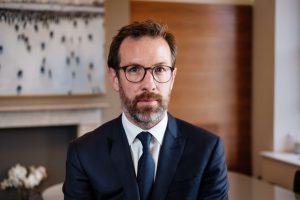 Monckton tax specialist, Frank Mitchell, has been granted Patents of Precedence entitling him to admission to the Inner Bar in Ireland and the status Senior Counsel (SC).

Frank is one of thirteen Irish barristers to be appointed, this month, by the Irish Government on the recommendation of an advisory committee currently consisting of the Chief Justice, the President of the High Court, the Attorney General and the Chairperson of the Bar Council. The date for these barristers to be called to the Inner Bar will be fixed by the Chief Justice. See Irish Government news release.

Frank has specialised in VAT, Customs Duty and direct tax issues since 2000 when he worked in PricewaterhouseCoopers in Dublin and then London working in tax consultancy and litigation.

Frank has been a member of the European Commission’s VAT Expert Group since its inception. He was called to the Bar of England and Wales in 2010 and joined Monckton Chambers in the same year as a result of his specific interest in the European law aspects of indirect taxes. He spreads his time between the UK and Ireland according to clients’ needs.