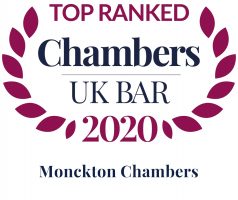 Monckton Chambers is one of the most highly ranked sets in the UK as it has been recommended in eleven practice areas; in five of these, Monckton is recognised as a “Band One” leading set:

The Set has also been ranked in a further six categories:

Individual members were also recognised as “Leading Individuals” in a further seven categories:

This is how the researchers summarised the set:

A “first-choice set” for competition and EU law, Monckton Chambers also earns top-tier rankings for its indirect tax and telecommunications expertise. It is also widely considered one of “the leading public procurement disputes chambers.” The set houses an enviable bench of competition and EU experts including Daniel Beard QC, who is described by market sources as “a leading competition silk with profound knowledge of competition law issues, case law and procedure.” Top-ranked Gerry Facenna QC has quickly risen the rankings owing to his “really pragmatic approach” to EU law. Anneli Howard, whom a solicitor describes as “one of the leading juniors of her generation,” has the distinction of being ranked in the highest tier for both disciplines. The set is regularly called on by public bodies and international corporations to act in cases which address the most pressing issues of the day. The “premier competition silk” Jon Turner QC has recently represented household names including National Grid and British Airways. On behalf of Chris Leslie MP and Tom Brake MP, members successfully argued at the CJEU that the UK’s notice under Article 50 is unilaterally revocable. Monckton Chambers’ “excellent barristers” are also recognised this year for their work in community care, administrative and public law, civil liberties and human rights, data protection, environment and sports law.

For further details on how Monckton Chambers performed, visit the Chambers and Partners website.