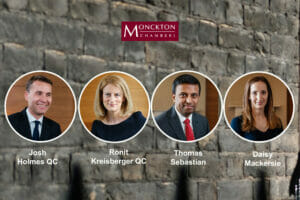 The Competition Appeal Tribunal has refused to certify two applications for collective proceedings on an “opt-out” basis.

The two competing applications were brought by O’Higgins (represented by Scott+Scott) and Mr Evans (represented by Hausfeld & Co). Both advanced claims against major banks seeking compensation for alleged losses sustained by buyers and sellers of G10 currencies in foreign exchange markets.

The Tribunal, by majority, upheld the objection of the banks and refused to certify the applications on an “opt-out” basis. It also granted three months to O’Higgins and Mr Evans to decide whether or not to amend their applications so as to proceed on an “opt-in” basis.

A link to the judgment is here.

Josh Holmes QC appeared on behalf of the NatWest/RBS Respondents in Cases 1329 and 1336 (instructed by Macfarlanes LLP).